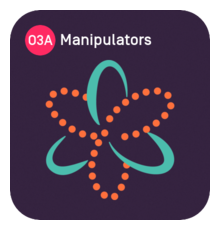 The O3A Manipulator plugins allow changes to be made to the content of third order ambisonic (O3A) streams.

A variety of manipulations are included, from simple changes to the level of sound in particular directions, through to directional compression, manipulations to move sounds around in space and equalization that can be "painted" on to the audio scene. The library also includes some specialised panner plugins, tools to split up the scene into sections for separate processing, and some other features.

These are VST2 or AAX plugins for macOS X (10.7+) or Windows (Win7+) running on 32bit/64bit Intel. They can be hosted in some Digital Audio Workstations (DAWs) that can handle tracks with sufficiently high channel counts. Options include Reaper, Pro Tools Ultimate, Pyramix and Max/MSP. These plugins use the SN3D higher order ambisonic (HOA) convention, at third order, which needs 16 channels. The exact channel counts needed for individual plugins are listed below in the Plugins section. Not all plugins are supported in AAX.

We use some free software, data and artwork in these products. Before purchase, please check the technical requirements and license agreement. Prices include VAT where applicable. EU VAT is normally charged at your local rate using the MOSS VAT system. By beginning the payment process you agree to be bound by our terms and conditions.

These manipulators can be used to make changes to a 3D mix. The mix needs to be a O3A 3D mix, which you might have put together by panning (for instance using the O3A Core plugins), or by upmixing from surround formats like 5.1 using the O3A Upmixer plugins.

After the mix has been altered, you can make further changes, or convert it to a surround mix (for instance back to 5.1) using decoders in the O3A Core, O3A Decoding plugin libraries, or Rapture3D Advanced's AAX or VST2 plugins.

The O3A Move plugin lets you pull sounds towards a particular point, or push them away. You can collapse the entire mix to a single direction and then smoothly expand it out all around you.

You can also use this plugin to move sounds relative to the horizontal plane, to tune the amount of height in the mix. (You have to think about things like that when working in 3D!)

The O3A Zoom plugin lets you move the whole 3D scene around in space, for instance to bring a thunderstorm in from the far distance, or walk forwards in a concert hall.

The O3A Directional Mask lets you increase or decrease the sound level in a particular direction. You can use this to boost a particular instrument in the mix, or reduce an audience cough.

The O3A Spatial Mask is even more sophisticated, letting you "paint" the level modifications that you want on to the O3A mix.

The O3A Compressor reduces the dynamic range of a mix. It has a unique "Directivity" control which allows the compression to be applied uniformly across the mix, or independently in different directions.

There are three equalizers included. Two are fairly conventional (a classic parametric EQ and a 31-band 1/3 octave EQ) except that they are applied to the entire O3A mix. The third works like the O3A Spatial Mask, so you can paint the directions in which the EQ is applied, for instance to pick out a particular singer.

This plugin reduces the dynamic range of a O3A mix. Its directivity control allows different directions to be compressed together or separately.

This plugin smudges 3D O3A mixes in time and space to increase their diffuseness.

It can also be used to place a mono sound into a O3A mix without a definite direction.

This plugin applies a low or high pass Butterworth filter to an entire O3A scene.

This plugin warps a 3D O3A mix to move sounds around.

This plugin allows an entire O3A scene to be moved around, for instance to give the impression of entering a space.

This plugin allows an entire O3A scene to be moved around. This plugin is essentially the same as O3A Zoom, except it exposes X, Y and Z automation parameters rather than Azimuth, Elevation and Distance.

This plugin emphasises sounds in a particular direction in a 3D O3A mix using an algorithm also used in Rapture3D.

This plugin emphasises or de-emphasises sounds in a particular direction in a 3D O3A mix using simple controls.

This plugin allows gains to be applied to each ambisonic order in a 3D mix.

This plugin shifts a region in an O3A audio scene to somewhere else.

This plugin moves all sounds in a 3D O3A soundfield from one side to another.

This plugin warps a O3A scene which matches a screen image to compensate for a change in screen size.

This plugin allows level changes to be painted onto the audio scene.

This plugin keeps sounds in the "beam" of the spotlight and makes others disappear.

This plugin applies a simple parametric equalizer to an entire 3D O3A mix.

This plugin paints a 31-band 1/3-octave graphic equalizer onto a 3D O3A mix.

This 3D panner simulates large sources and distance. This plugin is essentially the same as the O3A Panner LS, except it exposes X, Y and Z automation parameters rather than Azimuth, Elevation and Distance.

This panner places eight sounds in a 3D space.

This plugin converts mono to third order ambisonics (O3A), spreading sound out in a line.

This plugin converts from 16 channel O3A B-Format to a 20 channel "A-Format".

This plugin converts from 20 channel "A-Format" to 16 channel O3A B-Format.

This plugin allows an audio scene to be separated into two, by painting.

This plugin splits directions into two separate 3D O3A mixes that can be reassembled with O3A Join.

This plugin swaps O3A streams that have been 'split' by other plugins.

Please check everything is okay here before purchasing software.

These plugins do not work with all VST 2 hosts. One reason for this is that the O3A plugins need large numbers of channels on their input or output busses. Check the individual plugins for the channel counts they need, but all of the O3A plugins need at least 16 channels on each track, and some need more. Also note that not all VST 2 hosts can use shell plugins. In particular, at the time of writing shell plugins are not supported in Nuendo or Cubase.

Due to channel and stem restrictions, not all plugins are supported in AAX. Please see the plugin descriptions for details.